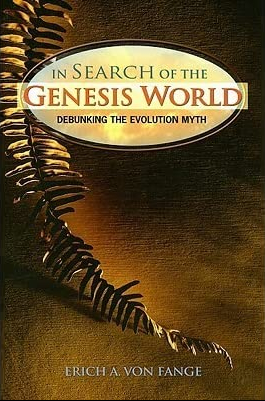 I came across this book when a former pastor was leaving our church. He was downsizing his library and my husband thought this book would interest me. I like to read about apologetics, especially works having to do with Genesis. This one looked ideal. Better yet, someone in the LCMS wrote this book and published it with CPH. This was exciting, for most everything I had read on Creation, Christian apologetics, and the like was by AIG, CMI, or Master Books. Not that those are bad. In fact, they are quite well done and I have both enjoyed those books and found them helpful. But, I had been looking for something from the LCMS perspective, and I thought this was the book I had been looking for.

So I started this book off with hope. Though the writing was a bit clunky, the text of In Search of the Genesis World seemed worth the read at the start. But that hope quickly died. Ok, maybe it just simmered down to a tiny flame. I do not want to say this book is worthless. That would not be true. It has been thoroughly researched and I can clearly tell the author put a good deal of work into it. But this is not the first book I would hand to anyone wanting to learn more about creation or even Christian apologetics.

To begin, I am not sure why the author titled the book as he did. Yes, he does mention a couple of events in Genesis. However, he rarely quotes Scripture and the vast majority of his writing has almost nothing to do (or at least no reference to) events in Genesis. I got the sense that he was trying to explain that early man could travel earlier than most people still think, and they used boats pretty often. I mention this only because he kept mentioning boats throughout the book, although this often had little to do with the chapter in question.

Perhaps his goal was to show mankind was more advanced early on. I got the sense he was trying to discredit the authority of evolution. But what was the thesis? I found one at the end, but it hardly flowed with the whole text. The book is disjointed from beginning to end. It appears as if he compiled, in no particular order, a collection of very long, detailed, perhaps even over-researched, essays into a book and called it done. I got the impression that he wrote some chapters out of order in that they connected better together than they did with the ones immediately surrounding them.

There is a good deal of interesting information in this book, but you have to dig through whole swaths of engorged writing to get to the point.  It was as if he found every example on a subject and listed them shotgun-style sentence after sentence. These chapters were often buried in many series of small sections so disorganized you wondered if maybe you had turned too many pages and started another chapter altogether. Then there were many chapters (or sections of chapters) where I could not help but ask “What’s the point?”

It also amazed me that he could go on ad nauseam about certain points that had no relevance so far as I could see and then he would suddenly make a statement about something that, to me at least, appeared rather important but he never divulged more information. The author clearly did his research on a great many subjects, but on the oddest of topics he threw at you, he would not explain beyond a sentence. For example, he spoke often of these people our ancestors knew as the “Ancient Ones” and spoke about myths that people held that connected to the Bible. But what are they? Where are they? Why mention them if you will not talk about them or where they are found?

There were a few other points I took issue with, some of which are more important than others, that are worth mentioning. For one, he seems to confuse species and kinds as well as speciation and Evolution. With the ways he used the word species, I wondered if he actually knew what the word meant. Do you mean like a wolf and a labrador are species of the same kind, or do you mean that birds and dogs are species? This brings me to the second point. He seems to not understand the difference between macro and microevolution and confused the definitions within the book. My third point is that he confuses two fossil “discoveries”, one of which was a fake. I would have thought with how thoroughly he researched everything else he would have known this well-known discovery and its fraudulent counterpart. For the fourth point, he seems to question the accuracy of the Hebrew texts and seems to think that the LXX is the trustworthy version. Finally, and in a similar vein, he seems to lean more towards an older-earth belief, though he strongly rejects evolution.

Still, there were a couple of chapters that would be very useful for some people to read. There were engaging chapters on the Piltdown fraud, the effects of evolutionary thinking on various fields of study, and a few other unique topics. He explains the faults of evolution and the obsessive devotion of its adherents, though he expounds a little too much. As I said, the book is not useless, and I think parts are worth reading. I even noted at one point that I was glad I had “stuck it out this long”. This book is definitely for the technical reader, and there will be times you will be wondering where your encyclopedia is. Even so, this book could be helpful to the pastor of congregants asking tough questions about science. For this, I would pick a handful of chapters to read. In fact, there are three chapters I would be inclined to read again, but I am not sure what you would need to pay me to read the entire book from cover to cover again.

And this gets me to my real point. I love AIG, CMI, and ICR. I have read their work for years and I will continue to read their work. But I was sorely disappointed in this book. I genuinely thought I had finally found a well-written and thoroughly researched book from the LCMS on the subject of creation apologetics on the level of AIG. But by the end, I found I had an over-researched, long-winded, over-complicated book on a vast number of largely disconnected topics that, while occasionally interesting, were hardly on the Genesis world. Worse still, I think he quoted Scripture maybe a half dozen times throughout the text.

Unfortunately for me, this was not the book I had been looking for, although I will soon comment on another that may have met my expectations. I find it disappointing that the LCMS has dropped the ball on this subject at large. I suppose it is now less of a surprise I have met seminarians who embrace evolution and reject a literal reading of Genesis. The interest in the sciences, in dinosaurs, in knowing about our origins and how to defend the faith is evident. We have the resources (CPH being one) to meet this need and interest. Yes, there are resources from other Christian groups that deal with these topics. But the people, and youth especially, are looking for answers from someone. Why not us?

Blessings to you and yours,

3 thoughts on “Rose: Review – In Search of the Genesis World”

My favourite new mug. #coffee
Main takeaway from this year’s #miLCMSpastors conference: There are many threats and challenges facing Christ’s church for such a time as this, but even in such a time, God is faithful and omnipotent. “And we know that for those who love God, all things work together for good, for those who are called according to His purpose” (Romans 8:28).
The Michigan District for the #miLCMSpastors conference gave all the new pastors a shepherd’s staff with our name, ordination date, and church plaquered on it!
Rev. Dr. Tim Saleska speaking on Psalm 109 and the imprecatory psalms. #miLCMSpastors #psalms
Morning Matins. #miLCMSpastors
#miLCMSpastors