1, Why do the nations rage and the peoples plot in vain?
2, The kings of the earth set themselves, and the rulers take counsel together, against Yahweh and against His Anointed, saying,
3, “Let us burst their bonds apart and cast away their cords from us.”
4, He who sits in the heavens laughs; the Lord holds them in derision.
5, Then He will speak to them in His wrath, and terrify them in His fury, saying,
6, “As for Me, I have set My King on Zion, My holy hill.”
7, I will tell of the decree: Yahweh said to me, “You are My Son; today I have begotten You.
8, “Ask of Me, and I will make the nations Your heritage, and the ends of the earth Your possession.
9, “You shall break them with a rod of iron and dash them in pieces like a potter’s vessel.”
10, Now, therefore, O kings, be wise; be warned, O rulers of the earth.
11, Serve Yahweh with fear, and rejoice with trembling.
12, Kiss the Son, lest He be angry, and you perish in the way, for His wrath is quickly kindled. Blessed are all who take refuge in Him.

This is the first Messianic psalm we come across. The psalm begins with a rhetorical question. Resisting God’s authority is feckless, so why do nations seek to be independent of God, or to be enemies of Him and His children? The word “anointed” in the text is the Hebrew word Messiah, which transliterates to Christ in Greek, as shown in the image below.

The New Testament makes it clear that this psalm was written in application to the coming Christ (Acts 13:32-33). This psalm, however, is specifically a Messianic psalm that tells of the coming opposition that will be against Christ. Past nations have set themselves against God and the Anointed One, Jesus Christ the Messiah (indeed, Rome itself, both under Pontius Pilate and the persecution of Christians that subsequently followed). Current nations still resist Him today, desiring to “burst their bonds apart and cast away their cords” from God—that is, to sever all ties to God. This has been true of all premodern, modern, and postmodern cultures.

Of course, God laughs at such futility. One may deny God’s authority, but denying His authority does not unbind you from it, and neither does it make Him any less real. We are bound by His authority whether we like it or not. So, a person believing they can be released from His authority—the Creator of the entire universe and of all things known and unknown—truly is hysterical.

As such feckless denial occurs, God will ridicule them with His wrath. In His ridicule, He will pass judgement upon them, be it by oppression, famine, pestilence, war, whatever He finds suitable. In our postmodern culture, there is the thought that God is simply gentle and loving and doesn’t want to hurt us (i.e. moralistic therapeutic Deism). All these things are true of God’s character, but He is also just, holy, and wrathful.

In Scripture, Zion is often used to signify the city of Jerusalem as well as the nation of Israel as a whole. Zion was a southern hill upon which a Jebusite stronghold was fortified until David conquered it (2 Samuel 5:6-7). After some time, it became synonymous with Jerusalem. In verse 6, God declares King David as the only king with the representation and authority of His authority. Therefore, as Jesus Christ is made King through God’s anointing in the line of David (see a record of His genealogy in Matthew 1), so He is the only King to exercise God’s authority over Zion (that is, the church of Christ, which is the universal body of believers).

The word “church” comes from the Greek word ἐκκλησία (ekklēsia), which literally translated means “the whole body of Christian believers.” Furthermore, since Zion, or Jerusalem, is symbolically representative of all Israel, that includes all Christians of all time (read the following verses in order Romans 2:28-29; Galatians 6:15-16; Philippians 3:3). This is because of the promise of the covenant God made with Abraham, Isaac, and Jacob to be passed through all their descendants; and if you remember, God gave Jacob the new name Israel. Israel’s descendants started as a family, which eventually grew into a literal nation (the Jews), and continues in all Christians today because of the three aforementioned passages I provided.

Thanks for reading through that long digression, but let’s go back to God’s laughing in verse 4, which Martin Luther comments:

Let us laugh at raging Satan and the world (yes, even at sin and our conscience in us). Truly, because the punishment of the godless is delayed up to now, it is certain that God is also laughing, God, who is in heaven and cannot be driven from there by impious men. Therefore, He rightly laughs at their vain attempts. (LW 12:25)

The sudden change to the first person in verse 7 is an affirmation of the one being anointed—Jesus Christ. Indeed, God the Father gives His only begotten Son the heritage—or inheritance—of the nations through the line of David, giving Him also the earth as His precious possession, and, therefore, ruling over all those who inhabit it.

In Mesopotamian texts, a king’s reign was often likened to smashing pottery. So, “break” here is to be understood as “reign” or “rule,” and “iron” as “strength,” and “potter’s vessel” as “weakness.” So, the Anointed One—Jesus Christ—would reign over the nations with strength and the power to shatter them because compared to Him, they are weak (cf. Isaiah 64:8, God is the potter and we are the clay, so as He has the power to form us, so He has the power to destroy us).

This brings me back to God’s wrath. Just like with God, we often picture Jesus as this gentle, comforting, utterly merciful man. Yes, He is certainly those things, but He is also King. A king rules, a king protects his people from the enemy, and a king wages war against the enemy of his people. 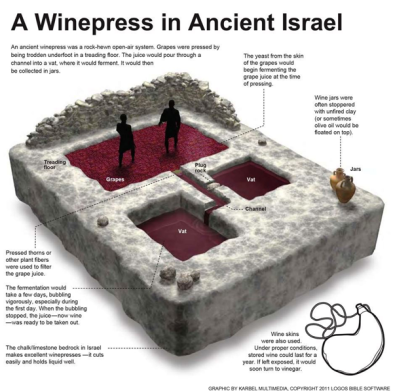 In Revelation, we get quite a startling depiction of Jesus’ kingship. In Revelation 14, John writes a detailed image of Jesus’ kingship, “with a golden crown on His head, and a sharp sickle in His hand” (v. 14). As we read on, we read that this one with the sickle swings His sickle across the earth “and gathered the grape harvest of the earth and threw it into the great winepress of the wrath of God. And the winepress was trodden outside the city, and blood flowed from the winepress, as high as a horse’s bridle, for 1,600 stadia” (vv. 19-20). That is Jesus exercising the wrath of God against the wicked (the enemy).

This eventual event is likened to a winepress. The image on the right is how ancient Israel would make wine (don’t worry about reading the words in the image). They would fill the largest reservoir with grapes, step into the reservoir, and stomp on the grapes as the juices would flow into the lower reservoir. This is how Revelation describes God’s coming wrath against the wicked—against all unbelievers. Yes, our amazing God is loving, merciful, and graceful, but He is also just, holy, and wrathful. Yes, Jesus is our God, but He is also King; and as our King, He will cast His enemies into the winepress of God’s wrath, whose wrath will crush them. Jesus is King, not a conscientious objecting fairy.

A horse’s bridle is as high as 6 feet, and 1,600 stadia is about 183.93 modern miles (296 kilometres). This imagery illustrates the magnitude and violence of God’s wrath against the wicked. The wicked will suffer His wrath, and it will not be pretty, but it will be victory for God’s people.

These verses turn back to the kings—or rulers—of the earth, serving as a warning with a therefore. These are the rulers who are set against the Anointed One—the one who has power over the earth with the ability to utterly destroy. If they are wise, they will acknowledge God in reverence and piety and honour Him lest His wrath be incurred against them, for His wrath occurs quickly—no warning is given except the words provided in Scripture.

The psalm ends with a concise gospel message—that God’s allies have His protection and will be blessed. Blessed how? Refer back to Psalm 1:3, “He is like a tree planted by streams of water that yields its fruit in its season, and its leaf does not wither. In all that he does, he prospers.” In my commentary on Psalm 1, remember how I noted that this prosperity is not material or financial, but salvific prosperity.

Whilst this psalm is not about our times, this second psalm can nevertheless be a warning to our nations today. Nation after nation is setting itself into a contemptuous disposition against God and His Anointed One, Jesus Christ, to whom dominion over the entire earth (and Heaven) has been given (cf. Matthew 28:18). If today’s rulers (and individuals) continue in their negative, alienated disposition against the King of the earth, they will be met with the the wrath of the Almighty without warning. Those nations who are God’s allies, however, will remain protected—that is, the single nation of Israel (not the political nation in the secular realm, but the spiritual nation of God’s people in the spiritual realm). This might seem frightening, but as Christians we have nothing to fear.

Read carefully 2 Corinthians 5:17-19, “Therefore, if anyone is in Christ, he is a new creation. The old has passed; behold, the new has come. All this is from God, who through Christ reconciled us to Himself and gave us the ministry of reconciliation; that is, in Christ God was reconciling the world to Himself, not counting their trespasses against them, and entrusting to us the message of reconciliation.”

Not only did God reconcile us to Himself through Christ (which means He has restored friendly relations between us and Himself), but we are also entrusted with this message of reconciliation, hence our duty of spreading the Gospel. “Since, therefore, we have now been justified by His blood, much more shall we be saved by Him from the wrath of God” (Romans 5:9).

I hope these words excite you as much as they excite me. How awesome is it that God has saved us from His wrath through Christ? Therefore, you and I have no reason to be afraid. As God’s child, you and I will never experience His wrath.

Father, I pray for my nation. Every day that passes, she becomes more godless and her children follow after her vices. You know that the governmental actions of my nation do not reflect the true actions and desires of Your children. I ask that You not forget Your people who live in godless nations—those who have not forgotten Your great name. We seek to serve and honour You with our whole heart, in spite of our government’s godless actions. But if it be Your will, I pray for our government. Give our leaders wisdom in their governance so that we may live peaceably with one another and other nations, and please help to turn them from their godless ways—to refocus their attention on You and Your Word rather than the words of men, for they fear men more than they fear You, O Lord. If it be Your will that our government should perish in due time, save Your people who take refuge in You from our government’s godless actions. Thank You for Jesus. Thank You for mercifully sending Him to save us from Your wrath. Father, Your love for us is ineffable. Anything I do will never be enough to express my gratitude. Therefore, I shall praise You forevermore. In the name of Jesus I pray. Amen.