As a conservative, I appreciate Matt Walsh’s conservative views and apologetics. He’s a very intelligent man and has great input on many things, and he’s a great asset for the conservative philosophy, but he’s not infallible. Sometimes, he can go off the rails and say something completely wrong. Unfortunately, when his errors are critiqued, at times he can be rather stiff-necked and refuses to see his errors and reform what he’s said. I used to be the same way, and it requires a lot of humility to question something you’ve said when others critique you and reform your previous view as a result. I hope others see the same error I’ll be explicating here because it’s a really important issue, and I pray that Walsh sees his error and repents of what he said if he happens to read this.

So, the issue at hand. Walsh recently posted on Twitter the following photo: 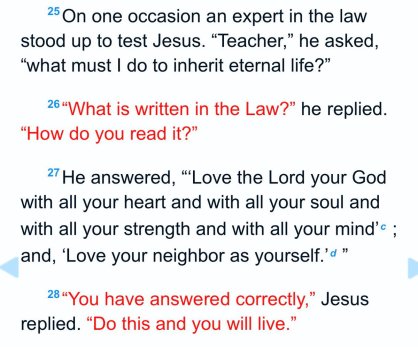 He posted this and said, “A person can believe in Jesus and not love Him. We are saved by loving Jesus, not simply by believing. Jesus tells us this directly and unmistakably in this verse.” Here’s the entirety of his tweet: 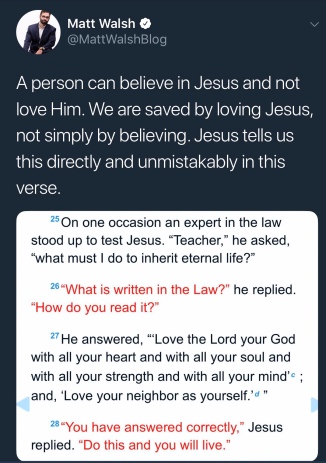 I love you, Matt Walsh, but you are incredibly wrong. We are saved by faith, not works (Romans 3:28; 5:1; 10:9; Acts 16:31; etc.). These texts are from Paul and Luke, but Jesus Himself even says so, “Whoever believes and is baptised will be saved, but whoever does not believe will be condemned” (Mark 16:16). (Keep in mind that Baptism is God’s work, not our work.) Walsh’s quoted text comes from Luke 10. The man’s answer in the text was correct, but Jesus’ affirmation made clear that no one can do what the Law demands. The lawyer (an expert in the Law) gives the right answer from the Law, and Jesus acknowledges this, but no one is capable of fulfilling this Law to its fullest extent, and His parable illustrates this point (more on this in a bit). That is why Jesus’ justification by faith is necessary.

By saying we’re saved by loving Jesus, he’s making salvation reliant on us and our works, but we are incapable of loving Jesus at all times. So, Walsh’s interpretation of this text dooms us. If what he says is true, and it is true that we cannot love Jesus at all times, then we are condemned and nothing can be done about our situation.

Instead, Jesus did what the Law required. Jesus loved God to the fullest, which we are incapable of doing. He did this on our behalf. By faith, His work is attributed to us. That is the hallmark of the cross. (This is called justification by faith. For more on this, see article IV of the Apology of the Augsburg Confession.)

What Walsh is preaching is a works-based religion that depends on us—which ironically does not work and has never worked—rather than a faith-based religion that depends on Christ and what He has done. So long as we keep looking to ourselves for assurance of salvation (i.e. our works of loving Jesus), we will see nothing but our weakness and therefore our damnation, and we have no hope. We must look to Christ and His Word (i.e. believing Him and His promises), whose work alone has saved us, and it is in Him in which our hope is anchored (cf. Hebrews 6:13-20).

Like the Good Samaritan, Jesus came into our miserable condition (i.e. dead in sin), He had compassion on us, and He saved us. At the end of the parable, Jesus calls us to go and do likewise not as the basis for which we are saved; it is our response to His saving action. Jesus asks the lawyer to identify who the good neighbour in the parable was. The lawyer, in his typical racism as a Jew, couldn’t even bring himself to say, “The Samaritan,” but rather, “the one” who helped the half dead man. Then Jesus tells him to go and do likewise.

Jesus is convicting the man. The man has not done this. Jesus is not saying, “You will be saved if you love Me by loving your neighbour.” That’s what the Law says, but we cannot do what it says. Jesus tells this expert of the law—a man who has arguably kept this law—that he has not done this because he is incapable. Not just him alone, but all of us are likewise incapable of being the Good Samaritan. We cannot do what the Law requires. So, Jesus did what the Law requires for us. Works flow from faith, not the other way around.

First of all, what is righteousness? An adequate definition is to have a right, reconciled status before God. This is the definition I like to use, but there’s more to it. I like the definition Rev. Dr. Charles Arand, professor of Systematic Theology at Concordia Seminary, “You are the human God envisioned you to be when He created us.” How does this come about?

If it were up to Walsh, by using Luke 10:25-28 as a proof text, he would say it is up to us by loving Jesus. The whole of the Scriptures, however, say this comes about by Jesus and what He has done, who gives us His Holy Spirit to give us the gift of faith to justify us in His work (cf. Ephesians 2:8-10). Again, as this Ephesians text emphasises, works flow from faith, not the other way around. In other words, we are saved by belief (faith), and we do good works because we cannot help but do them, which is granted by the Holy Spirit.

With righteousness now properly defined, there are two kinds of righteousness. Passive righteousness is God making us and declaring us righteous for Christ’s sake, which is received by faith. This is righteousness coram Deo (before God). Before God, we become righteous (right before God) in the work of Christ, not from our own works. We are not saved by climbing a ladder of works of loving Jesus. As Paul says, we are justified (saved) by Christ’s blood, whose death reconciled us to God the Father (Romans 5:9-10).

Active righteousness is good works brought about by the Holy Spirit in faith. This is righteousness coram mundo (before the world). Before the world—before other human beings—we become righteous (right before others) in the good works we do for one another. For example, when a man borrows $20 from a friend and pays it back, he is justified and righteous before his friend because he has done good before him. When a person gives money to charity, they are justified and righteous before people because of their good monetary giving. These are simple ways in which we love Jesus, but they do not save us.

In the first place, our works cannot reconcile us with God or obtain grace. Instead, this happens through faith alone when a person believes that our sins are forgiven for Christ’s sake, who alone is the mediator to reconcile the Father [passive righteousness, coram Deo]. Now all who imagine that they can accomplish this by works and can merit grace despise Christ and seek their own way to God contrary to the gospel…

Further, it is taught that good works should and must be done, not that a person relies on them to earn grace, but for God’s sake and to God’s praise. Faith alone always takes hold of grace and forgiveness of sin. Because the Holy Spirit is given through faith, the heart is also moved to do good works… [active righteousness, coram mundo]

For without faith and without Christ human nature and human power are much too weak to do good works: such as to call on God, to have patience in suffering, to love the neighbor, to engage diligently in legitimate callings, to be obedient, to avoid evil lust, etc. Such lofty and genuine works cannot be done without the help of Christ, as He Himself says in John 15[:5]: “Apart from Me you can do nothing.”

By saying we are saved by the act of loving Jesus rather than faith in Him, Walsh is making us the judge of salvation rather than God. It is impossible to look at a person and judge whether or not he or she is saved. Who gets to decide what loving Jesus looks like? Who gets to decide what is enough? Who gets to decide how much of loving Jesus is enough to be saved? I understand what you might be frustrated with, Walsh, but it’s not up to us. It’s up to God, and He has done what was required of our salvation in Christ. This is what is meant when Jesus said His last words on the cross, “It is finished.” The work is already done. The gift has been given to us. We need only believe it.

As is tradition, a poem for my mom for #MothersDay, based on Proverbs 31:25-29. Happy Mother’s Day, mom! I love you! #MothersDay2021 #motherhood
Emilia made me some coney dogs in preparation for returning home to Michigan when I start my call. 🤤
I was trying to show off to my wife when she was watching me. Pretty much an illustration of my real life attempts with impressing her. Yet by the grace of God she still said yes to marrying me. #destiny2 #videogames #bungie #destinythegame #xbox #gamer #gaming #bungiedestiny #destinyplayers
I’m not sure what happened there. #destiny2 #videogames #bungie #destinythegame #xbox #gamer #gaming #bungiedestiny #destinyplayers
Tengo mi cafecito para el #MultiethnicSymposium. ¿Y tú? #therestandthewest @concordiasem
#christianpoetry #instagod #lutheran #lcms #writersofinstagram #writersnetwork #poetry #poetrycommunity #poem #poetsociety #poetsofinstagram