One of President Franklin D. Roosevelt’s most famous lines is, “The only thing we have to fear is fear itself.” His intention might’ve been to inspire, and this might even inspire some people. Yet this ignores the reality of the world we live in tainted by sin, and that we are mere humans who have legitimate fears and anxieties. In this psalm, David writes that even when our parents desert us, our God will never desert us. “For my father and my mother have forsaken me, but the LORD will take me in” (v. 10).

This is one of the Old Testament images we see of God as our Father. I have two loving parents who are a part of my life and a loving stepmother who’s a part of it as well. I don’t know what it’s like to be deserted by my biological parents, but some of you might. This isn’t something I can relate to or offer wisdom from years of similar experience, but I do know God is our Father and He is not the type of Father who deserts His children. God forsook His own Son on the Cross when Jesus took God’s wrath upon Himself for us so God doesn’t have to forsake us in death. God forsook His own Son on the Cross just so He doesn’t have to forsake His adopted children in Baptism, who were His enemies before knowing Christ (Romans 5:10). Because of Christ, as Christians we never have to fear God’s punishment or His desertion; it is never going to happen because Christ took our place on the Cross. 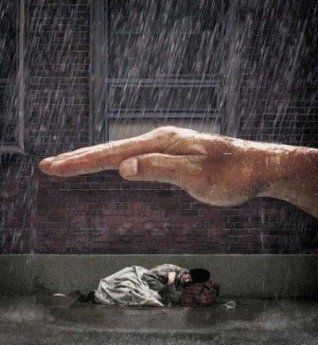 It is not unchristian to be afraid. When you experience fear, it does not mean you have no faith. You might be lacking faith and trust in God at the moment, but this doesn’t damn you.  It’s okay to experience fear for any reason. Acknowledge that emotion and deal with it in light of Christ. In the psalm, David is not denying his fear in ignorance; he is acknowledging that in comparison to God’s faithfulness to him, his fear is only a minuscule problem that God can easily illumine. St. Peter wrote, “Humble yourselves, therefore, under the mighty hand of God so that at the proper time He may exalt you, casting all your anxieties on Him, because He cares for you” (1 Peter 5:6-7).

Consider the featured image on the right. I like this image because it illustrates God’s care for us that Peter describes. Acknowledge your fear, cast it upon Christ, and then rest assured He will take care of you because God our Father is not the type of parent who deserts His children when they are in need.